This summer Black Kids Swim, a Maryland based non-profit organization, has partnered with Bounce TV and the YMCA to encourage more Black children learn the life saving skill of swimming.

According to the USA Swimming Foundation, 70% of African Americans do not know how to swim. And according to the Centers for Disease Control and Prevention African-American children drown at 5.5 times the rate of other children.

To help educate parents and children on the importance of water, pool and swimming safety, Bounce TV, the first and only over-the-air broadcast television network for African Americans, is joining forces with the YMCA of the USA (Y-USA), the national resource office for 2,700s Ys across the country, and Black Kids Swim, the web’s #1 family resource for African-American swimmers, to launch a new multi-faceted Public Service campaign.

Bounce TV has produced a series of Public Service Announcements featuring Olympic medalist Maritza Correia McClendon, who made history as the first black woman to earn a place on the United States Olympic Swim Team and went on to become the first to earn an Olympic swimming medal (2004 Athens). The PSAs encourage water and pool safety and include direction to information on the YMCA’s “Safety Around Water” program. Bounce TV will air the spots nationally starting Memorial Day Weekend and is sharing them with affiliates to run them on their primary channels locally.

CATEGORY: Featured, In the News, Video
No Comments
0 Likes 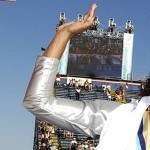